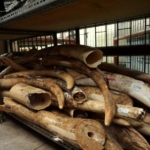 Following the destruction of 662 kgs of confiscated ivory in Beijing on 29th May 2015, Zhao Shucong, Head of China’s State Forestry Administration, set out 10 tough measures to tackle the illegal wildlife trade and suggested that there would be strict control of ivory processing and trade until the commercial processing and sale of ivory and its products are eventually halted.

In response to the speech, William Hague, Chairman of United for Wildlife’s International Taskforce on the Transport of Illegal Wildlife Products said:

“The speech made by Zhao Shucong, Head of China’s State Forestry Administration, is an extremely important step forward in the fight against the illegal wildlife trade. The Chinese Government’s announcement on wide ranging measures to combat wildlife crime, in range states and consumer countries, should give us all great hope. The United for Wildlife International Taskforce on the Transport of Illegal Wildlife Products, which I chair, will do all it can to support measures to clamp down on the trafficking of illegal wildlife products.”

United for Wildlife partners are working together to combat the illegal wildlife trade. Our joint activities will support the measures announced in Beijing by:

As HRH The Duke of Cambridge, President of United for Wildlife, said during his recent visit to China:

“The illegal wildlife trade is our common enemy. It is a vicious form of criminality: plundering the natural resources of poorer countries, taking lives, hindering development and spreading corruption. Traffickers think nothing of violating laws and sovereignty anywhere they can to exploit a loophole or turn a profit. And international cooperation is our strongest defence against them. With that in mind, we must join forces”.

The Taskforce first met in March 2015 and is chaired by Mr William Hague, former Secretary of State for Foreign and Commonwealth Affairs. The Taskforce has brought together senior representatives of the transport industry to make practical recommendation for the reduction of trafficking of illegal wildlife products.

The members of the Taskforce are: