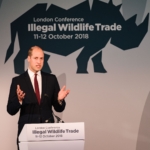 The conference, hosted by the UK government, aimed to strengthen international partnerships across borders and beyond government and to focus on 3 key themes; tackling IWT as a serious organised crime, building coalitions and closing markets.

The Duke of Cambridge opened the conference with a speech that encouraged delegates to “celebrate their successes” while also recognising that illegal wildlife trade “is a transnational crime that you cannot leave to [your] passionate, but thinly stretched, wildlife crime officers to tackle alone.”

“I for one am not willing to look my children in the eye and say that we were the generation that let this happen on our watch.” – The Duke of Cambridge on the ‘heartbreaking’ thought of elephants, rhinos & tigers being extinct in the wild once his children reach their twenties. pic.twitter.com/sjvudK0fSE

United for Wildlife was later represented in the conference during a panel chaired by Lord Hague on how the transport sector combats trafficking. The panel was made up of members of the Transport Taskforce, and together they spoke about its development and plans for the future.

It’s been so wonderful to see heads of state around the world come together with NGOs, transport representatives and financial representatives to take a deeper look at the issues surrounding illegal wildlife.